Some might say royalty, money, or power is the root of being a king.  When it comes to retaining walls, the only real king in that regard is mass.  Gravity retaining walls rely on the self-weight to resist the lateral pressures that soil apply to a wall.  This weight has a range from small landscape blocks (5-10 lbs) for garden beds, to machine set blocks that weight hundreds or thousands of pounds.  The overall mass of a retaining wall will give greater safety factors for a specific project. 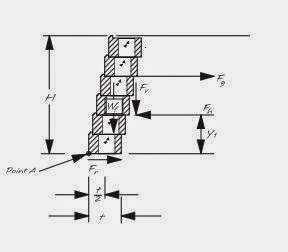 Mass could be the reason why the short wall in your yard is beginning to overturn as the years go by.  If the lateral pressure behind the wall is higher than the mass of the retaining wall system, then the wall will eventually overturn.
Constructability does play a role for each site since you wouldn’t use a machine set block for a 2-3 foot high wall since the cost of installation would be outrageous.  On the opposing side, it wouldn’t make sense to use a small garden block to build a 20 foot high structure.

If machine set blocks work best due to weight of block, then why aren’t they used more often?  A simple answer to this is that each site is different and the same weight that a machine set block has, can be accomplished with geogrid reinforcement.

Geogrid reinforcement is a flexible polymer synthetic which reinforces the soil behind the block and increase the overall mass of the structure.  With the addition of geogrid reinforcement every two courses, the overall mass is compromised of the weight of the reinforced soil plus the weight of the segmental units.  Using geogrid reinforcement, a standard segmental block wall could weigh as much, if not more than a machine set block.
A simplified calculation to establish how much the geogrid reinforced mass weighs is to take the unit weight of soil (lb/ft3 or kN/m3) multiplied by the embedment length of geogrid and the height of the wall.  This will give a lb/ft which is the weight of wall per lineal foot.
Directly comparing a machine set block with an Allan Block Classic with geogrid reinforcement, the numbers don’t lie.  If the machine set block is 2 ft tall x 4 feet length and weighs 2000 lbs, this would give a 10 foot high wall a total weight of 2500 lbs/lf (5 block tall x 2000 lbs / 4 linear feet).  Looking at an Allan Block Classic (roughly 1 foot high) with 6 foot geogrid length and an average unit weight of soil of 120 lbs/ft3 for the same 10 foot high wall.  The overall mass is 7200 lbs (120 lbs/ft3 x 10 feet high x 6 foot geogrid length).
A difference of 4700 lbs is very significant when the additional mass adds more stability to the wall structure.  This additional weight not only adds stability to the wall, but is typically less expensive to install without the necessity of large equipment.


The next time you look outside your window and see the garden, patio, or driveway wall leaning forward, just remember that Mass is King.
Posted by Allan Block